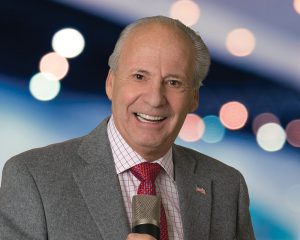 Michael Solomon, former NYPD Special Investigator and bestselling author, is the survivor of a bizarre double murder attempt on his life.

As a national political and motivational speaker, Michael is sought after by many organizations and corporations. He is known as the speaker who leaves his audiences laughing, inspired, motivated and begging for more.

During his tenure in the intelligence division, he was assigned to protect the Shah of Iran and Madame Chang of Taiwan. He has personally met four U.S. Presidents. He was assigned as the intelligence officer to the U.S. State Department, where he participated in treaty negotiations between the United States and Turkey. In 1982, Michael proposed a change to the NYC retirement law, which saved them over $120 million, reduced taxes and balanced the city’s budget.

He retired from the Police Department and joined the corporate sector in finance and management. After losing three corporate positions, and nearly bankrupt, he embarked on his own. Applying his own style of management, he was nominated by a national magazine for having the best company in America in his field.

Achieving success, he returned to his old beliefs and started to take care of the less fortunate. His work for various charities earned him the respect and praise of his community. In 2003, he was cited by both houses of the New York State Legislature in Senate and Assembly Resolutions as Humanitarian of the Year.

From The Gutter To The Boardroom
"OUTSIDE THE COCOON - HOW DO I GET FROM HERE TO There?"
"Why Are The People Who Really Know How To Run This Country Busy Driving Taxis Or Cutting Hair?
The Problem Is You Do Not Know The Problem
Where Have All The People Gone? Has Technology Depersonalized Your Organization?

What’s Good About Your Business and What’s Knot.

No that’s knot a misspelling in the subtitle. There may be a knot in your business plan. Have you ever tried to untangle a knotted thin necklace? You are probably feeling the frustration as you read this.

You may have trouble controlling your laughter as Michael’s wit and wisdom keeps you on the edge of your seat begging for more, as he relives the lessons he learned in life and business that he shares with you.

Although very humorous, he is extremely serious as he shares with you his life’s ups and downs from surviving a bizarre double assassination attempt on his life to the reinvention of himself. From being broke and almost bankrupt to becoming a millionaire in less than five years during the worst recession in America. He went from being a nobody to being named as the best company in America in his field.

Do you find yourself trying to beat back the flames of failing without a fire hose? Learn how to re position yourself and capture more of your market by perceiving yourself to be different than your competitors.

A straight forward, passionate, witty, shoot from the hip style together with over thirty-years of executive leadership and speaking experience makes Michael a much sought after motivational business speaker.

Students all over are preparing themselves academically for the world outside the cocoon of the classroom.

How they think, plan for their future and behave while in school can affect them for the rest of their lives.

As a former CEO and Founder of one of the best businesses in America, and an Adjunct College Instructor, Michael has been through almost every experience in the corporate world and academic world. In 2008 he presented the Keynote address at the New York Institute of Technology Graduate School Commencement for their MBA program.

One of the topics during his presentation is: “Do I Like The Tattoo I woke Up With In The Morning.” It is a humorous but serious look into how people see your painted and pierced body from the other side of the desk and how social media can destroy your career and life before it ever begins.

He has developed a program which is simple and works. As a college motivational speaker he has helped thousands of students become “Successful by Default” by helping them change their attitude about school and their purpose in life.

It is more than entertainment it is enlightenment.

During this humorous but very serious talk, Michael engages his audience as he examines the changes in American politics and culture over the past 100 years. You will leave this presentation asking yourself, “why hasn’t anyone ever explained it to me that way before.” He explores the myths of the great depression, immigration, taxation, global warming, political correctness and many other subjects that are on the mind of many Americans. He explains why the once superpower of America is starting to lose its shine.

Why haven’t we learned from history Michael asks, as he spells out in bold detail where he believes government has gone wrong?   He examines how the press has and continually tries to influence the path of America through its biased reporting and skewed polls that are harmful to the American people and serve no one except their own agenda.   Why are our elected representatives using the Constitution as a soapbox for reform without considering the consequences of their actions?  The more you listen the more outraged you will become as he lays out his plan to save the American dream from becoming the American nightmare.   Although very humorous, Michael’s talk may shock you into reality.

How to become the second mouse who always gets the cheese.

Does the world need another business speaker? Not unless that speaker has something unique to say about the world of business and is told from a unique perspective. Michael is that speaker.

Through his wit and wisdom Michael shows his audiences why the best time to start or expand a business may be during bad economic times. That is just what the speaker did. He started his business during one of the worst recessions of the 20th century and blew his competitors out of the water.

You may have trouble controlling your laughter as Michael’s humor keeps you on the edge of your seat begging for more, as he relives the lessons he learned in life and business that he shares with you.

Good leadership is the key to success. A team is not merely a collection of people. It’s a process that evolves; a process of give and take that builds working relationships. The basic building block of good team building is for a leader to promote the feeling that every human being is unique and adds value to the team no matter how large or small.  If you manage people, do you know how famous you are? They talk about you on the golf course and they talk about you in the hair salon. Wouldn’t you like those comments to be positive ones.  Learn the keys to successful leadership and management with Michael’s very humorous, yet extremely serious talk as he shares with you his life’s ups and downs from surviving a bizarre double assassination attempt on his life to the reinvention of himself. From being broke and almost bankrupt to becoming a millionaire in less than five years during the worst recession in America. He went from being a nobody to being named as the best company in America in his field.

How to take your business to the next level even during bad economic times will leave your audience with hope not despair. You will learn how to make your business grow while others are struggling just to keep their heads.

They don’t have facial expressions. Do you really know who you are doing business with? In the cutthroat world of business, many aspiring moguls reject kindness as a virtue and develop a sharp competitive edge that can wound struggling colleagues. For those who wish to rise to the top without knocking others down, Michael offers guidance on how to succeed without destroying those around you. People want to do business with people not emails and faxes.

Through his humorous yet serious presentation Michael motivates his audience on how to think outside the box and put the humanness back into business.

His human touch, not giving into or relying only on electronic options as most companies do, lead him to be nominated as the best company in America in his field.

The speaker also explores how customer service in America has vanished. Why are consumers treated like the enemy? This talk is filled with real life humorous and horror stories about how the technological revolution has hurt business by removing humanism. Based on the speakers book “Success By Default-The Depersonalization of Corporate America.”

Michael’s presentations are more than entertainment they are enlightening.

“We were looking for a speaker who could challenge conventional thinking about how to approach consumers in the finished goods space. Michael’s presentation was a great combination of strategic thinking, tactical strategies and humor, augmented with insights directly from our own industry. Consumers are driving the conversation around healthy products, and Michael’s talk gave our professional audience great new ways to develop their own marketing strategies to connect with those shoppers.”

“Michael is a constant source of inspiration and knowledge for any professional in any relevant market who wants to understand consumer behavior more deeply. His work is constantly being updated and his presentations bring powerful ideas that take us out of the comfort zone and pushes our need to act with more strength to develop strategies able to transform the culture of the companies and make them customer-centric organizations.”

“Michael Solomon is a great resource on today’s consumer and customer expectations. His presentation on building a brand that engages customers in the wild new world of marketing provided a wealth of needed knowledge to our direct selling executives.”

Where Did My America Go?