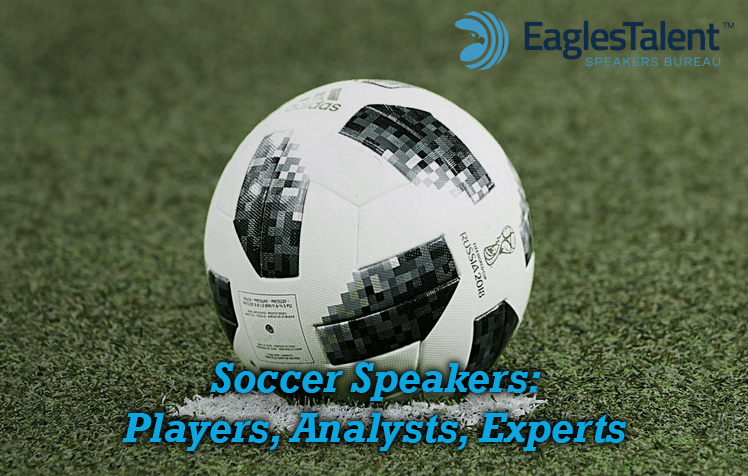 Soccer, by almost any measure, is the most popular sport in the world. Played by around 250m players across 200 countries, it’s big business, with top teams worth billions. FIFA, the sport governing body, makes $3billion from media rights from the 2018 World Cup alone.

Known as ‘the beautiful game,’ soccer emerged from England in the mid-19th century and has spread across the world, inspiring and motivating generations of young people to dream and reach for the stars. The secret to soccer’s success is in its simplicity. The rules are easily understood and it can be played from the glittering stadiums of major teams to city streets just about anywhere in the world. Domestic football is watched by billions every week. 1.12 billion people watched the World Cup Final in 2018 (compared to 114 million for the Super Bowl).

Soccer’s popularity is growing in the US, especially among younger people, and so are soccer speakers at various events. Soccer’s ability to inspire and its extraordinary global reach make it a great subject for a keynote or session speaker. Glenn Lovett of the global standard of ratings, Nielson, had this to say: “Football’s extraordinary reach into countries and cultures around the world makes it unequaled among sports, in terms of value to media and sponsors.”

To add international and inspirational flare to your event, make sure to consider one of Eagles Talent’s expert soccer speakers.

Angela is an accomplished speaker who has spoken at a TEDx event on leadership and team success. She is an inspirational Sports Leadership Expert, Olympian, and Soccer Analyst.

Her biggest role with the US squad came in the 2008 Summer Olympics, where she led the team with four goals, two of which in the US semifinal victory over Japan.

Angela founded Empowerment Through Sport in 2012, an organization focused on discovering sports leadership skills and athlete transitions that translate to life success. She has become a regular speaker on sports leadership, equality, inclusion and safe spaces, anti-bullying, and the power of sport and its impact on personal growth and development. She has also served as the Women’s Sports Foundation President since January 2015.

As a studio analyst for the FIFA Women’s World Cup on FOX, former US Women’s National Team star defender and three-time Olympic Gold medalist Heather Mitts brings impressive on- and off-the-field credentials to the network’s coverage of the world’s biggest women’s soccer competition. As an expert analyst, Heather knows what it takes to make a successful team.

Mike Forde is one of the world’s leading authorities on elite talent and high performance, having worked in professional sports since 1998.

Mike has built a powerhouse business consulting around building high-performance teams and ‘Talent Factories’ for over 30 professional teams across five global sports. Through his extensive work, Mike has created a clear methodology around building high-performance environments and leading talent that is repeatable and scalable for teams and companies anywhere to take their organizations to the next level.

Heralding from England, the home of football, but based in the US, Gary played for one of the world’s most successful and best-known teams, Manchester United.

As goalkeeper, Gary’s specialism is talking about pressure. As author of ‘Succeed Under Pressure,’ he speaks about not only surviving pressure, but thriving, using techniques including reframing to take things that scare you and make them exciting. He helps people see pressure as a positive challenge that will take them forward.

As the longest serving Captain of the US Women’s National Soccer Team, Christie knows what it takes to lead and succeed.

She won Olympic gold with her team and imparts lessons that relate to all aspects of leadership in organizations and businesses. Her leadership paid dividends as she guided her team to the 2015 FIFA Women’s World Cup Championship and to three Olympic Gold Medals, earning 311 caps, making her one of our most well-known American soccer speakers.

Josh is not only a well-known comedian having exploded onto the scene as the winner of NBC’s Last Comic Standing, but he is also an accomplished athlete, playing at the 2004 Paralympic games in the US soccer team.

Josh provides a unique blend of comedy and experience of success. He possesses an undeniable likability and comedic timing that belies his youthfulness. Josh continues to break down stereotypes of people with disabilities one laugh at a time. His stand-up routine is in a constant state of evolution. His off-the-cuff improvisational skills guarantee that no two shows are exactly alike. Despite his extensive schedule of stand-up tour dates, Josh maintains an active role on the US Paralympic Soccer Team.

Contact Eagles Talent today to hire a soccer speaker for your next event!