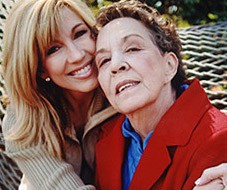 It’s no surprise that Emmy Award winning TV/Radio host Leeza Gibbons, has made it to the Apprentice Finale. She has been a strong competitor, since the first challenge! Not only has Gibbons worked well with pretty much every other contestant, but did so with exemplary character! Leeza has arguably been the strongest competitor, raised a lot of money, contributed a ton of great ideas, and has been a great leader!

As a viewer, you couldn’t help but root for Gibbons and her amazing charity: Leeza’s Care Connection. After losing her mother and grandmother to Alzheimer’s disease, Leeza created a place where they offer care for the caregiver, and to help them figure out where to go next so they can get resources for a very difficult journey. Leeza originally created The Leeza Gibbons Memory Foundation in 2002, as a promise to her mother to “tell her story and make it count!”

On February 16th, don’t forget to tune in and watch the “Lovey Leeza” vs “Hurricane Geraldo,” in the Celebrity Apprentice season 14 finale.

The final competition is to create a 90-second commercial spot for Universal Orlando and sell vacation packages.