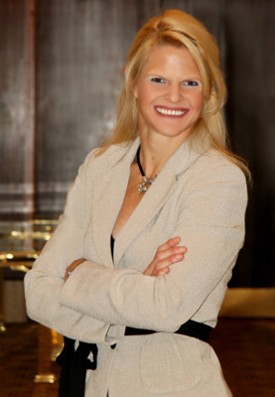 The Winter Olympics are finally here! The world is excitedly cheering their countries on to victory. Olympian and author Nikki Stone remembers this feeling all too well. At the 1998 Winter Olympics in Nagano, Japan, Nikki became America’s first-ever Olympic Champion in the sport of inverted aerials. Now Nikki sets out to become an inspiration to Olympic hopefuls, as she tells a first-hand account of her experience at the Winter Olympics.

The two biggest questions I’m asked as an Olympic Gold Medalist are: “What does it feel like to walk into the arena as an Olympian at the Opening Ceremonies?” and “What does it feel like to hear your national anthem play when you’re standing on the Olympic podium?” I really can’t say that one feels better than the other, and both moved me to tears. This week, let me share the former and be sure to keep an eye out for the latter in a blog to come.

According to the Nielson Co. ratings, “Nearly a third of the people on Earth watched the Beijing Olympics opening ceremonies [in 2008]”. For all those billions of people who will be watching the Vancouver Opening Ceremonies, let me give you a sneak peak into what these athletes are feeling…

I dreamed of being an Olympian since I was five years old when I saw Nadia Comaneci score a perfect “10” in gymnastics. But it would be another eighteen years before it would become a reality. After all the years of hard work, hours upon hours of training, overcoming the injuries, the stress of qualifying, and the endless sacrifices, I was finally going to the legendary Olympic Games.

The full weight of this reality didn’t actually hit me until I walked into Athlete Team Processing. This is where all the athletes, coaches, and staff register for the Games and receive their official Olympic uniforms. They hand you a shopping cart and you wind your way around an enormous room filled with Olympic apparel. After making the rounds, I recall looking down at a shopping cart overflowing with reds, whites, and blues. I was so excited to finally look like a true Olympian that I asked the woman who was packing our uniforms to leave out my awards jacket. I proudly walked out in my new jacket, and found that most of the other Olympians couldn’t wait to don their stars and stripes as well. As we all strolled around the room introducing ourselves, I realized that we were no longer just freestyle ski team members, hockey team members, or speed skating team members, but United States team members.

From Processing, we moved directly over to the Olympic Village. After making my way through all the security scanners and restricted entryways, I walked into a sea of athletes–all proudly displaying their country’s colors. We were given a quick tour of the village. My jaw dropped down to my knees as they showed us the cafeteria filled with foods from every country, the virtual game arcade, the hair salon, the computer surf shack, the post office, the movie theater, the gift shop, the flower shop, the athlete lounge, the convenience store, the chapel, the medical center, and more. And if viewing all the facilities wasn’t enough, I realized I was going to share this village with athletes like Alberta Tomba and Dan Jansen.

Not only did I get to share the village with these incredible athletes, but two days later I got to walk into Opening Ceremonies with them. All the countries gathered in the cafeteria. The officials had the arduous job of lining up 2,000 rambunctious athletes to prepare for their march to the arena and into Opening Ceremonies. The countries marched into the arena in alphabetical order, leaving the United States as one of the last countries to parade around the loop.

Finally, it was our turn to enter the stadium. Even though we were on foreign soil, the stands erupted as the US team walked into the arena. I recollect enthusiastically searching out all the cameras so I could wave to all my family and friends back home. All the smiles, waves, and cheers got me three-quarters of the way around the parade loop. Suddenly, I looked up and saw all the athletes who had marched in before us seated directly in front of me. My cheering quickly faded and I burst into tears. Not tears of sorrow, but tears of joy–for I recognized that I was there with the top athletes in the WORLD…and I was one of them.

The competitions hadn’t even begun and I had already experienced more in those three days than most people will experience in a lifetime.

This year, I have the honor of helping mentor the athletes as they go through Olympic Processing. And you see, I understand that when the athletes want their new jackets left out of their bags, they too, want to feel like a proud Olympian representing the USA.