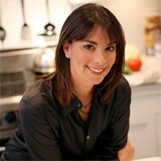 October is officially National Pizza Month. In honor of this incredible month and this incredible dish, we decided to share a couple of recipes from our Celebrity Chefs, such as…

The Sneaky Chef is the brai

15 ounces Can of chickpeas (garbanzo beans)

Prepare the UNCLE BEN’S® Whole Grain White Rice Long Grain as instructed on the box.
Preheat oven to 425 F degrees and spray a shallow 9-inch by 9-inch baking pan with oil.
For simple homemade Sneaky Chef Chickpea Puree rinse chickpeas add 3 to 4 tablespoons water and puree in food processor until smooth. (Makes about 1 cup of puree. Leftovers can be kept in refrigerator for up to three days or frozen for up to three months.)
In a mixing bowl combine rice, 1/4 cup Chickpea Puree, egg, 1/2-cup cheese, salt, and flour. Mix well and press into the prepared baking pan spreading evenly.
Bake for 12 to 15 minutes until crust is lightly browned. Remove from oven.
In a mixing bowl combine 1/2 cup Chickpea Puree (or store-bought hummus) with the barbecue sauce. Toss 2 tablespoons of the sauce mixture with the chicken. Set aside.
Spread remaining barbecue sauce mixture over prepared pizza crust and then sprinkle the 1 1/2 cups of cheese and chicken mixture evenly over the crust.

Bake for 10 to 12 minutes until cheese is bubbly and lightly browned. Allow cooling a few minutes, then cutting into squares and serving.