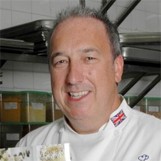 Do you wish your meals could be fit for a king? Then check out this rich recipe from a fifteen year royal chef, Chef Darren McGrady. Darren has acted as chef to Queen Elizabeth II of England and Princess Diana of Wales, and has served Foreign Heads of State including Presidents Bush, Clinton, Reagan, and Ford. He is now a private chef in Texas, and teaches cooking classes based on his book Eating Royally: Recipes and Remembrances from a Palace Kitchen.

Treat yourself to a taste of the upper crust with this delicious dessert recipe:

1.  Preheat the oven to 350 degrees and then prepare the pastry case/shell – In a large bowl add the flour and sugar and rub in the butter to resemble fine crumbs. Add the egg yolk and cream and form the paste into a ball.

2. Roll out the paste and line a 9 inch flan ring, then part bake the flan.

3. Prepare the filling – Place a mixing bowl over a pan of boiling water (like preparing hollandaise) and add 2 eggs, 1⁄2 tsp. cinnamon, 1⁄2 cup sugar, 1⁄2 tsp. vinegar and the salt. Whisk until the mixture starts to foam and then remove the bowl from the top of the pan to a cool surface. Continue whisking until the mixture reaches the ribbon stage. Pour onto the base of the flan and return to the oven until the filling has risen and is firm to the touch – about 15 minutes. Remove from the oven to a cooling rack and allow the filling to sink back into the shell. This is the first layer of the flan.

4. Melt the 6 ounces of chocolate and add the water and egg yolks. Whisk until combined. Spoon half of the chocolate mix over the top of the sunken filling and return the flan to the oven for a further 5 minutes. Remove from the oven and allow the flan to cool completely. This is the second layer of the flan.

5. Beat the cream and cinnamon until stiff and carefully spread half of the mix into the flan. This is the third layer.

6. Fold the remaining cream and cinnamon mix into the remaining chocolate mix and spread into the flan. This is the fourth layer.  Sprinkle on the grated white chocolate and refrigerate until set. – About 1 hour.