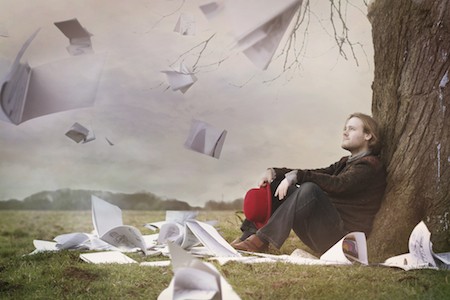 At just 28 years, David Trumble is already an international award-winning artist, author and illustrator. He rose to critical claim as the youngest political cartoonist to work at the Sun Newspaper (one of the largest newspapers in the world). Trumble’s work moved to the top of Amazon’s ‘Movers and Shakers’ list for his dynamic illustrations in the Simon & Schuster publication, A Random Book About the Power of ANYone by Talia Leman.

His TEDx presentation, The Journey to Indifference, at TEDxYouth@DesMoines has produced thousands of views on the TEDYouth YouTube Channel. He uses his personal journey of finding meaning in his life to help the audience embrace their own blank canvas of infinite possibilities.

Described as a “mega-watt talent” and a “consummate professional,” David writes and draws thought-provoking cartoons for the Huffington Post and been featured internationally through media outlets that include The Today Show, Upworthy, NBS’s iVillage, The Christian Science Monitor, Jezebel, The Boston Globe and The Sunday Times in the UK.

In addition to his speaking and editorials, David’s upcoming book series for children, Mother Goose Retold, which he wrote and illustrated, is set to be released this year (2014). The series retells the classic Mother Goose rhymes with original new verses, taking familiar stories into unexpected territory. Retailers have already ordered nearly a million copies of the series’ first three books, Twinkle Twinkle, Little Miss Muffet, and Humpty Dumpty.