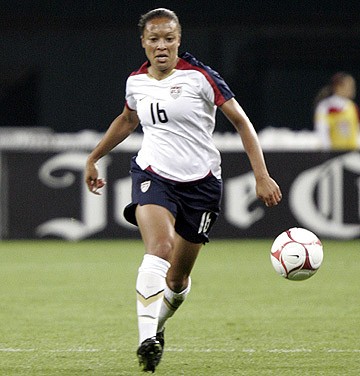 Soccer, or fútbol as it is known in some nations, is arguably the most popular sport in the world. The game has been cultivating superstars for centuries for the world to see. As a result of soccer’s massive and dedicated following, men’s soccer was added to the Olympic Games in 1900 with women’s soccer being added in 1996.

Midfielder Angela Hucles, was a standout player on the United States Women’s National Team, which won her two gold medals in 2004 and 2008. Even during that highly competitive time, she developed a passion for helping others achieve their “goals!”

Today she has become an excellent speaker on leadership, and overcoming adversity!

Hucles answered questions on “equal pay for equal play” in men’s and women’s professional sports, soccer popularity in the United States and internationally, and why bullying is a serious issue to herself and others:

1. Where do you stand on “equal pay for equal play?”

“While it might take some time, we are still fighting the good fight to get to equality.”

2. Why do you feel soccer players and fans do not translate into professional soccer viewership?

“We have had so many other sports in our country; baseball, basketball, football, that have taken precedence in terms of viewership. It’s going to take some time for soccer to translate from the world’s greatest most popular sport into viewers watching the sport, especially United States viewers.”

3. What is the significance of bullying as a speaking topic?

“Bullying is one of those things that prevent people from feeling empowered. While nothing has specifically happened to me growing up in terms of bullying, I still can feel and understand. It still resonates with me when I hear cases of people being bullied.”