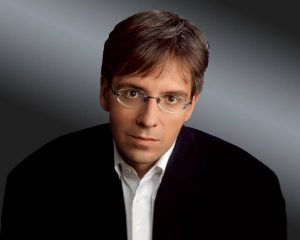 Ian Bremmer is a political scientist who helps business leaders, policy makers, and the general public make sense of the world around them. He is president and founder of Eurasia Group, the world’s leading political risk research and consulting firm, and GZERO Media, a company dedicated to providing intelligent and engaging coverage of international affairs. Ian is an independent voice on critical issues around the globe, offering clearheaded insights through speeches, written commentary, and even satirical puppets (really!).

He is the host of GZERO World with Ian Bremmer, which airs weekly on US national public television. Ian is also a frequent guest on CNN, Fox News, MSNBC, the BBC, Bloomberg, and many others globally.

Ian is credited with bringing the craft of political risk to financial markets, creating Wall Street’s first global political risk index (GPRI), and for establishing political risk as an academic discipline. His definition of emerging markets -“those countries where politics matters at least as much as economics for market outcomes” – has become an industry standard. “G-Zero,” his term for a global power vacuum in which no country is willing and able to set the international agenda, is widely accepted by policymakers and thought leaders.

A prolific writer, Ian is the author of 10 books, including the New York Times bestseller “Us vs Them: The Failure of Globalism” which examines the rise of populism across the world. He also serves as the Foreign Affairs Columnist and Editor at Large for Time magazine. He currently teaches at Columbia University’s School of International and Public Affairs and previously was a professor at New York University.

He earned a master’s degree and a doctorate in political science from Stanford University, where he went on to become the youngest-ever national fellow at the Hoover Institution. He received his bachelor’s degree in international relations from Tulane University.

Ian established Eurasia Group with just $25,000 in 1998. Today, the company has offices in New York, Washington, San Francisco, London, Brasilia, Sao Paulo, Singapore, and Tokyo, as well as a network of experts and resources in 90 countries.

Superpower: Three Choices for America's Role in the World
After the G-Zero: Overcoming Fragmentation
The End of the Free Market: Who Wins the War Between States and Corporations?
Managing Risk in an Unstable World
The Fat Tail: The Power of Political Knowledge for Strategic Investing
China, India and Beyond: The Opportunities and Pitfalls of Asian Growth
The Rise of the Different: Why the Global Order Doesn’t Work- and What We Can Do About It

Global policy expert Ian Bremmer calls for a complete rethink of America’s role in tomorrow’s world. In an increasingly volatile international environment, the question has never been more important. Bremmer explores three choices, each with its own benefits and drawbacks:
·       “Independent America” argues that it’s time for Washington to declare independence from the responsibility to solve everyone else’s problems. Instead, America should lead by example by investing in America’s enormous untapped potential;
·       “Moneyball America” acknowledges that we can’t manage every international challenge but asserts that we must defend U.S. interests wherever they’re threatened. It looks beyond phony arguments about American exceptionalism with a clear-eyed assessment of U.S. strengths and limitations; and,
·       “Indispensable America” insists that only Washington can promote the values on which global stability increasingly depends in our hyper-connected world. Turning inward would threaten America’s security and prosperity.

The global order that prevailed since the end of the Second World War has hit its limits. A breakdown in longstanding domestic, regional, and international political equilibria is making policymakers both less able and less willing to collaborate internationally. The result: a G-Zero world characterized by a growing vacuum in global governance.

Ian Bremmer predicts a new world order that will succeed our G-Zero reality. The question, is whether citizens across the world will remain passive throughout this process, or take on a proactive role in determining what future they want to live in.  This new world order will be characterized by three important developments:

1. The end of a cycle
2. The end of politics as you knew it
3. Saving global governance from the G-Zero

Mr. Bremmer will share his insights and views to help attendees understand the broader issues to consider as they formulate policy portfolios for the years ahead.

A generation after communism’s collapse, the future of free market capitalism isn’t what it used to be. Public wealth, public investment, and public ownership have made a stunning comeback. Certain that command economies are doomed to fail but afraid that truly free markets will spin beyond their control, the political leadership in China, Russia, the Arab monarchies of the Persian Gulf and other authoritarian states have invented a new system: state capitalism. Each in their own way, they’re using markets to create wealth that can be directed toward the achievement of political goals. Governments now dominate key domestic economic sectors. The oil companies they own control three-quarters of the world’s crude oil reserves. They use state-owned companies to manipulate entire economic sectors and industries. They own enormous investment funds that have become vitally important sources of capital for Western governments and banks weakened by financial crisis. An expert on the impact of politics on market performance, Ian Bremmer illustrates the rise of state capitalism and details its long-term threat to relations among nations and the future of the global economy.
At this presentation audiences will learn about:
·       The rise of state capitalism
·       Why it exists and how it works
·       The threat to free market capitalism

To navigate globalization’s choppy waters, every business leader analyzes economic risk when considering overseas investments or looking at market exposure. But do you look beyond reassuring data about per-capita income or economic growth–to assess the political risk of doing business in specific countries? If not, you may get blindsided when political forces shape markets in unexpected ways–from European accession in Turkey, social unrest in India, or protectionist legislation on China. Acclaimed political analyst and entrepreneur Ian Bremmer explains that by blending political and economic risk analysis, you make savvier investment decisions–seizing valuable opportunities around the globe while avoiding danger zones.
At this presentation audiences will learn:
·       How to spot political risk on the horizon and balance it against economic opportunities—and what it means for your global investments
·       How to understand the opportunities, and dangers, of dramatic Chinese growth
·       What are the trends around global terror, proliferation, and shifting geopolitics, and how it impacts the global markets
·       What growing political risk means for the global economy, and where opportunities are

The fallout from the still-unfolding global financial crisis provides several perfect examples of “fat tail” risk, those that flow from the low-probability, high-impact events that generate upheaval more often than we think. Bremmer shares with audiences how an understanding of the political dynamics generated by the financial crisis helps us forecast market risks, why politics matter more than ever for market performance, why the world’s wealthiest countries have begun to behave like emerging market states, and what all this means for investors and companies.
At this presentation audiences will learn:
·       The risks that flow from low-probability, high-impact events…like the global financial crisis
·       Why politics matter more for the performance of markets and for issues ranging from defaults to nationalization to regulatory reforms
·       Why developed states are behaving more like emerging markets
·       The shift from New York, Shanghai, and Mumbai to Washington, Beijing, and Delhi—and the risks that this trend creates

China bestrides the world as a colossus, and business leaders can’t get enough from the promised riches of Asia. But does unprecedented growth mean that your company will benefit from it? Ian Bremmer, intellectual entrepreneur and President of Eurasia Group, explains the dangers of Asian growth for global investors seeking to build a presence in international markets; for companies seeking to sell their products there; and for the global markets more broadly.
At this speech audiences will learn:
·       How to read the political and economic landscape in China, India, and beyond
·       How geopolitics is creating greater risks—and opportunities—for investors in Asia

Today, the American-led global order faces a fundamental challenge. It is not, however, the rise of the “rest.” It’s the rise of the “different.” As the dust settled after World War II, the United States emerged as arguably the most powerful state in history, and it set out to create a world order in its own image. The US shaped a multilateral system underpinned by globalization, serving U.S. interests but also those of anyone who accepted American preferences. The ‘rest’ who rose were like-minded, advanced industrialized democracies that bought into and buttressed the liberal international order. Today, the world has fundamentally changed. Rising emerging market nations are much poorer, they are less diplomatically experienced, and they have different priorities and political systems. Perhaps most importantly, they are inherently less stable.
What does this mean for the global order? It’s difficult enough to come to an agreement on complicated questions among five negotiators (as meetings of the United Nations Security Council have always demonstrated). But with the rise of so many other players who cannot be ignored—and aren’t ready to agree—conflict and a lack of leadership will increasingly be the norm.
At this presentation, audiences will learn about:
·       The causes and consequences of a broken global order
·       Geopolitical conflict at large, from Euro-crisis and US elections to Arab Spring and Asian power politics
·       The best bets for US-led initiatives going forward
·       The future of US-China relations
·       The shifting balance between security and economics
·       New investment strategies and the power of resilience
·       Winners and losers in a leaderless world and what the future will hold

Every Nation for Itself

The End of the Free Market