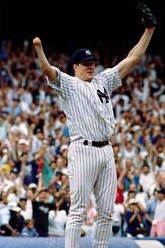 This September 4 marked the 20th anniversary of Jim Abbot’s no-hitter on September 4, 1993 against the Cleveland Indians. Jim is most known as the “One Handed Baseball Pitcher.” He was born with only one hand, but he used it to make a powerful mark on the world.

On the mound, Abbott wore a right-hander’s fielder’s glove at the end of his right arm. While completing his follow-through after delivering a pitch, he rapidly switched the glove to his left hand so he could handle any balls hit back to him. 1989 was his first season as a professional, and he won more games as a rookie than any other previous player without Major League experience.

Today he continues his career of excellence as a professional motivational speaker and an inspiration to all who have the pleasure of meeting him. He learned to overcome adversity and be an inspiration.