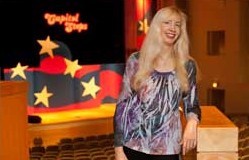 Whether you’re a democrat, republican, or somewhere in between, you will absolutely love the Capitol Steps. They are fully charged and hilarious, making fun of all: Obama, Bush, Clinton, and the entire U.S. Congress.

In this Eagles Talent Podcast episode, host Sheldon Senek talks with the Capitol Steps’ co-founder, Elaina Newport. She shares how the group started, and how they continuously develop hilarious political songs. In addition to talking with Elaina Newport, you’ll get the opportunity to hear some of their funny clips: Hilary Clinton singing “I Will Survive”; George W. Bush reflecting on his term as president; a song about the mad fad of Twitter; and a duet about “Blackberrys” from President Obama and Bush.
[display_podcast]