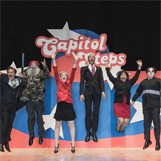 Why should you book The Capitol Steps?

Capitol Steps are a comedic group of Congressional staffers-turned-comedians who travel around the nation satirizing some of the most powerful people in the nation! Performing over 500 shows a year, these comedians bring big laughs to audiences everywhere who happen to keep up with the latest news in Washington. Although the Capitol Steps are based in Washington, DC, most of their shows are out-of-town or for out-of-town audiences, whether it’s the National Welding Supply Association, a University audience, High Schoolers, or State Legislators. In fact, the Capitol Steps have performed for the last 5 Presidents. With their brand of clean comedy, the only complaints the Steps seem to get are from politicians and personalities who are not included in the program. As the best contemporary political satire group in America today, they will leave your audience in stitches with their song parodies on the intrigues of government.

The Lighter Side of Politics
The Capitol Steps’ show is rip-roaring political fun. The seven-member cast is a constant transition of new costumes, props, and music. Their political satire song parodies take potshots at the outrageous goings-on in Washington.

Musical Musings
No matter which side of the political fence you’re on, you’re guaranteed to enjoy The Capitol Steps. Their production is rip-roaring political fun, one constantly updated to reflect today’s political headlines, with new costumes, props and music. In no way mean-spirited, their hilarious musical satire takes potshots at the outrageous goings-on in Washington, unafraid to say in public what most of us are thinking!

Equal Opportunity Satire
If you’re in the political public eye, look out! The Capitol Steps target issues and personalities in the news right now — picking on Republicans, Democrats and anyone else who deserves it — for an unforgettable entertainment experience.

Live Lampoonery and Recordings
The Capitol Steps perform over 300 shows a year all over the country and frequently appear on television. Over the last 20 years, the group has performed off-broadway and produced 24 recordings, including their latest, Papa’s Got a Brand New Baghdad and such ditties as Between Iraq and A Hard Place, Osama Come Out, Tomorrow; Bill’s Way; Fools on the Hill; Son of a Bush; One Bush, Two Bush, Old Bush, New Bush; It’s Not Over Till the First Lady Sings!; First Lady and the Tramp; Unzippin’ My Doo-Dah and more.

For more information on booking The Capitol Steps for one of your events, check out their page on our website or call our office at 1.800.345.5607.