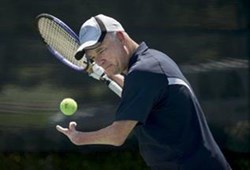 Although physically challenged, Roger has a past filled with impressive accolades:

After a successful tennis career, he now shares his inspirational story to inspire others:[bitsontherun mo8SmDfn]

Roger Crawford inspired others, he achieved phenomenal success in tennis. Roger’s remarkable life story of how he successfully competed though he appeared to have a significant disadvantage, is a powerful example of overcoming adversity.