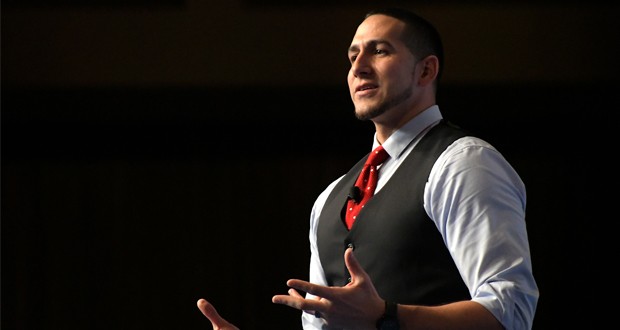 Gian Paul Gonzalez is most well known for his “ALL IN” speech. In 2011, Gonzalez was asked to present this speech to the New York Giants and it has been credited as the inspiration behind their 2011 Super Bowl victory. His inspirational talks have led him to speak in front of the NBA, NFL, English Premier League, and several Fortune 500 organizations. With most stuck at home due to social distancing orders, everyone can use a little inspiration right now. Luckily, Eagles Talent was able to sit down with Gian for an exclusive interview where he gave tips on how to stay successful during this time.

Gian Paul Gonzalez starts out the interview by telling viewers that you always need to give your absolute best. You never know who may be watching. An example Gian uses is that he, a ninth grade history teacher who was teaching at juvenile detention centers at the time, was asked to speak to the New York Giants. He mentions several times throughout the video how he truly felt that he would get up to present and none of the players would be paying attention. It turned out that the players were paying very close attention and used Gian’s words to inspire them to victory. Gian credits this opportunity to always giving his all and being the best he could be. If he wasn’t giving his best the day he was asked to speak to the Giants, would he ever have been asked?

Gian uses an anecdote from his grandfather when telling viewers to “be a shark.” Sharks are the number one predator in the ocean but lose their most precious weapon, their teeth, constantly. Why isn’t this a big deal to sharks? They have rows of teeth in their mouths and each time one falls out, another one moves forward to replace it. Gonzalez acknowledges that people are going to “lose teeth” right now, it is inevitable. It is how we respond to the situations in which we lose teeth that really matters.

Social distancing is tough on everyone and some days you may find yourself wondering if you actually did give it your all. It is easy to slip in to “I’m going to wait to do that thing until things improve. Gonzalez states that “all in” is a lifestyle and if you give your all to everything you do, eventually it will lead to success. It is what we do with our new opportunities that matters, not our failures.

After college, Gian Paul Gonzalez turned down an NBA contract because he wanted to go to his hometown and do something that made a real difference in the lives of young people. He is the founder and executive director of Hope and Future, an organization that uses sports and physical fitness to share a message of hope in inner-city schools and juvenile detention centers. Please click here if you are interested in learning more.

Interested in hearing more from Gian Paul Gonzalez’s “all in” message? Book him today for a virtual keynote sure to help inspire you and your team.