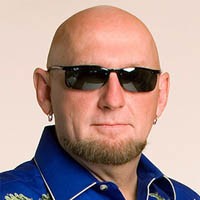 Larry Winget is unique. No one does what he does from the platform. No one says what he says and no one looks like he looks. He is the trademarked Pitbull of Personal Development® and The World’s Only Irritational Speaker®.

He is caustic, in-your-face, yet teaches solid principles for business and personal success all while being hilarious. Think Tom Peters meets Dr. Phil meets Dennis Miller.

Larry Winget is a four-time New York Times/Wall Street Journal best-selling author. He is a member of the International Speaker Hall Of Fame. He has starred in his own A&E television series, Big Spender, as well as numerous national television commercials. Larry is a regular contributor on many news shows on the topics of money, personal success and business.

Larry is not afraid to speak his mind with Eagles Talent podcast host Sheldon Senek. Listen to Larry Winget rant on the state of the economy, bailouts, credit card companies, debts, bankruptcy, rebuilding corporate and domestic finances, teamwork, and the stupidity of people. This is not an episode for the weak…and not one to miss.
[display_podcast]