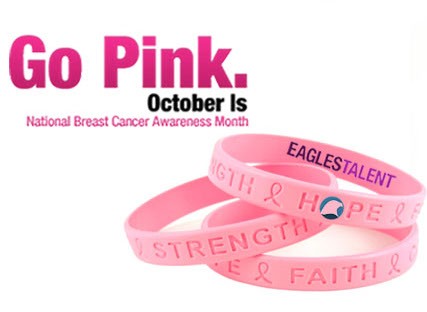 As you may know, October is National Breast Cancer Awareness Month. In observance of this month, we

decided to put together a top five list of our Breast Cancer Awareness Speakers.

These five remarkable women overcame breast cancer, and now use their influence to spread awareness to others. Check out our top five most highly recommended breast cancer awareness speakers here.

Diagnosed with breast cancer in December of ’94, Christine Clifford went on to write eight award-winning, humorous portrayals of her story and her experiences. Her experience taught her how to market and sell products, services and herself. Now, Christine shares that message with others. Christine has definitely cracked “the glass ceiling.”

Karen Mills understands what it takes to excel. Her humor is smart, funny, and original. No one can help you “get your laugh on” better than she can. Whether you are having a convention, an awards banquet, a weekend retreat, or any other corporate or private function, Karen will bring your crowd together through the joy of laughter.

Linda Ellerbee is an outspoken journalist, award-winning television documentary producer, writer and anchor, best-selling author, breast cancer survivor, mom, grandmother and one of the most sought-after speakers in America. As a popular and versatile speaker, Ellerbee travels thousands of miles each year, inspiring audiences with her insight, while filling banquet rooms and concert halls with laughter.

Called “the reigning queen of comedy” by the Canadian press, Marla Lukofsky is thirty-year veteran has performed stand-up in every major North American city. Lukofsky’s skill and energy as a seasoned performer combined with her sincerity, humor and confidence fuel a hilarious, and sometimes shocking but always passionate performance.

Jacqueline Marcell was a television executive, but barely survived as a caregiver to her (once-adoring) challenging father and sweet ailing mother, both with Alzheimer’s undiagnosed for over a year. Today, Jacqueline is a sought-after international speaker to educate on issues which unnecessarily cost years of her life.